I was on holiday for my husband’s 40th birthday when I first noticed a lump in my neck. 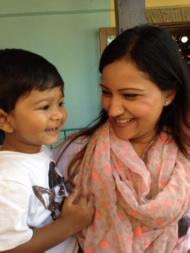 I went to my GP to get it checked out, but the biopsies and scans were inconclusive. Fast forward two years and I could feel the lump when swallowing and was wearing scarves to try and hide it. I went back to the doctors and after a biopsy on 4th February was diagnosed with thyroid cancer. Telling my family was one of the hardest things I had to do - everyone was in shock, and I don’t think it really sank in at the time. My Mum and Dad both cried but we’ve talked a lot about the cancer since, and how it makes us feel, which was good.

I had a thyroidectomy in March to remove the tumour and another operation to remove the spread. Three months later I had radioactive iodine therapy and had to be in total isolation for a week, which meant I couldn’t see my little boy, Jnay. He was only two at the time and didn’t understand why he couldn’t be with mummy.

After a second dose of radiation I got the all clear in February 2015. Having cancer has changed my perspective on life, and I feel very lucky that I was diagnosed when I was.

We know it’s a worrying time for people with cancer, we have information to help.

About Cancer generously supported by Dangoor Education since 2010.

Talk to other people affected by cancer

Questions about cancer? Call freephone 9 to 5 Monday to Friday or email us